Stack Overflow for Teams is moving to its own domain! When the migration is complete, you will access your Teams at stackoverflowteams.com, and they will no longer appear in the left sidebar on stackoverflow.com.

Check your email for updates.

Why has MMSE activity reduced so much after 9 January 2022?

There seems to be a drop in usage after the red vertical line: 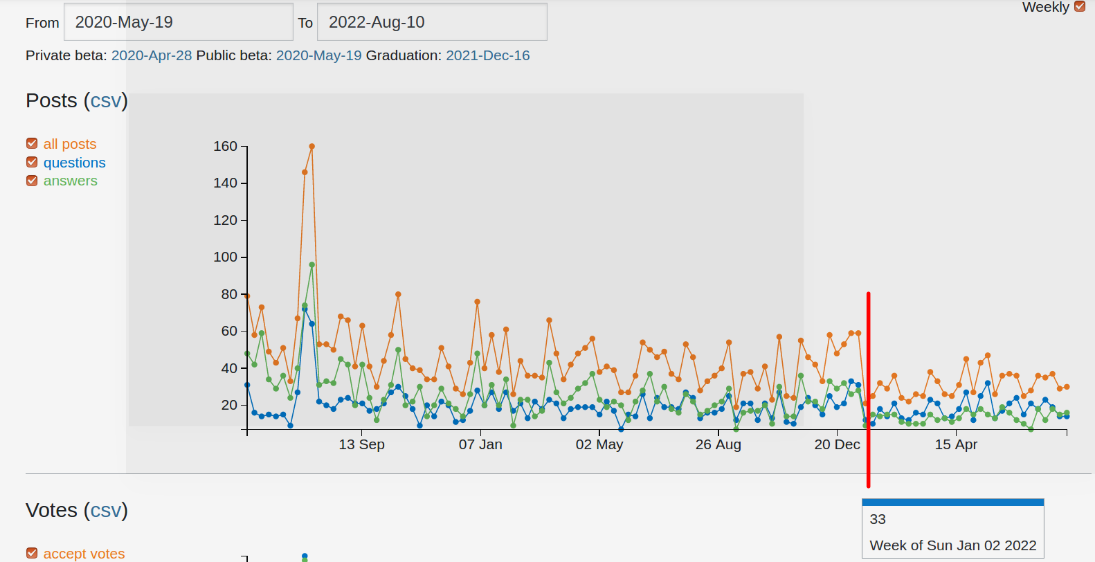 Edit: Since no one has offered any answers in the last 12 days, I'll offer some of my own theories (each in a separate answer).

One possibility is that those who ask a lot of questions have not been asking as much lately.

At the time of having our Beta label removed in December 2021, the following users had asked the following amounts of questions (I'm only listing people who asked 25 or more by that time, and Green Jack):

All of our pre-2022 power askers have asked questions at a lower rate in the last 8 months compared to the previous ~19 months (or whatever applies to their join date). But we've also had a user who wasn't very active before 2022 and asked 60 questions after the Beta label was removed on 16 December 2021, though this deserves closer inspection), and we have a user who asked 26 questions after 9 January 2022 and only 1 before that. So there is indeed a reduction in questions from power askers, but the questions we're missing from them have largely been replaced by more questions from new power askers. This data indicates that there might be a general decrease in questions (and activity in general) from the pre-2022 user-base across the broader population beyond just power users. Also, none of this explains why there was a sharp decline since 9 January 2022.

Conclusion: The above data suggests that a decline in activity from pre-2022 users could account for some of the overall decline observed, but not much more than the rise of new power askers would account for, and it doesn't suggest anything specific about the sharp drop after 9 January 2022.

Not the answer you're looking for? Browse other questions tagged .

7
The next step in the evolution of MMSE: upgraded reputation levels!

15
Better late than too late: Could a single word substitution in our name, be at least considered?
9
New close vote reason for abandoned questions?
8
0 Question Days
3
To what extent do we want to enforce the use of MathJax and ChemJax in MMSE posts?
7
The next step in the evolution of MMSE: upgraded reputation levels!