Are questions about topics proximate to, but not exclusive to, matter modeling on-topic for the site?

I'm asking this because of a recent string of questions*:

These are certainly reasonable questions that appear to have been well-received, judging by vote counts, presence of good answers, and lack of closure votes**. Yet they do not seem to be about matter modeling. While they (especially the first) will be relevant to many working on such topics, they are also far from exclusive to topics in matter modeling. In my opinion, the more natural destinations for those questions would be Academia.SE, TeX.SE, and StackOverflow, respectively. Note that this is not itself a reason to consider those questions off-topic here, see this post from the main meta.

Or should each question have a clear connection to the topics the site is supposed to be about? This connection can either be innate (e.g. questions about the use of VASP are presumably on-topic) or made explicit in the question when dealing with something proximate. Under such a standard, questions like How to use gnuplot to draw Bandstructure and DOS from VASP outputs? would still clearly be on-topic, but merely asking about how to set the size of gnuplot's output might not be. Similarly, questions like What are good resources to learn to code for matter modeling? appear to be more directly connected to the site's purpose than "How can I learn LaTeX?". (Although we should also keep in mind that some questions framed this way may approach the territory of boat-programming questions.)

Can we reach a community consensus and maybe settle on some guidelines for the site's scope? I think it's better to do so relatively early in the site's life, because adjustments later on will be more difficult to manage.

*These questions were in fact asked by the same user, but I don't think that is relevant to the question. There may be older questions of the same type.

**Personally I haven't yet voted on these questions one way or another. I hope to see some discussion here first.

Thanks for contributing such a well-written, well-researched, and well-considered question here!

I'm still unable to come to a very strong opinion either way. My hope with this site is that we can help people. There's been questions which were less about matter modeling and more about scientific publishing or high-performance-computing, and they never concerned me too much because someone here was able to answer it (i.e. to help the user).

I'm far more concerned about the questions we have which remain unanswered, for the following reasons:

A post can be migrated away after a maximum of 60 days. On multiple occasions, when we were nearing the 60-day mark for an unanswered MMSE question which I thought may be appropriate at a different SE site, I talked to the Engineering.SE moderators and then flagged the MMSE question for migration after getting permission from the Engineering.SE mods: 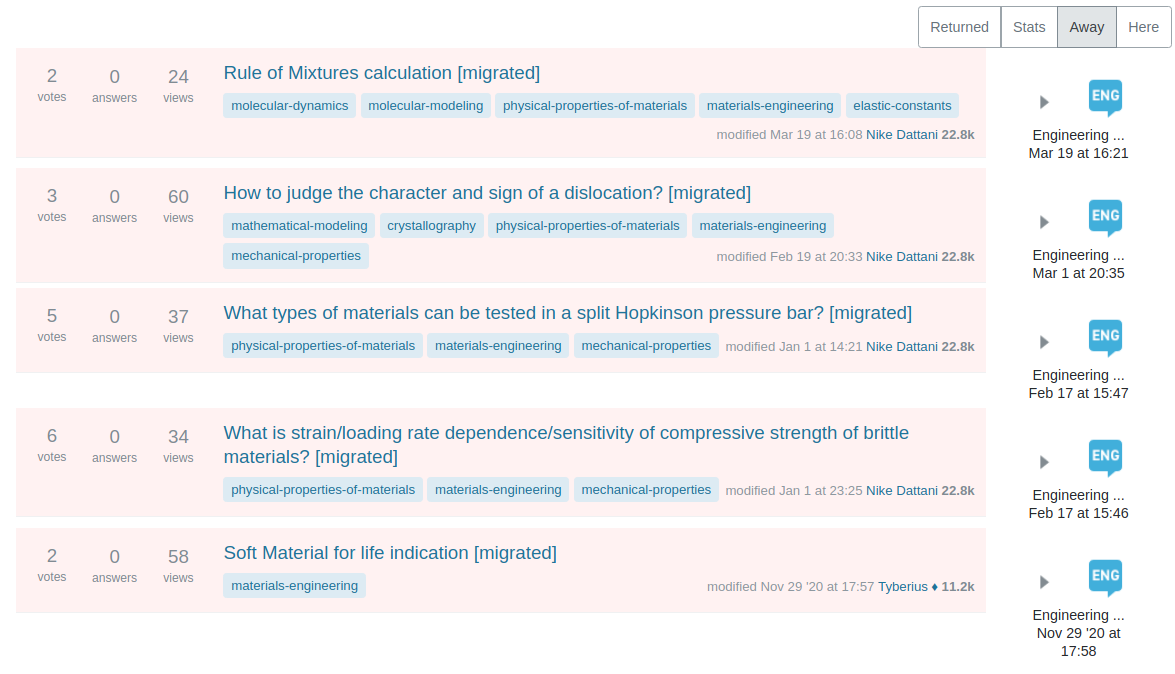 For the other two questions: I don't think they are as off-topic as for example "What is the difference between civil law and criminal law in the USA?", since they are questions that have come up for Matter Modelers while they were attempting to do their Matter Modeling research, and evidently our community had the right experts that were happy to answer the questions quickly and thoroughly. I see the following benefits to allowing such questions:

I can also brainstorm some possible disadvantages to allowing such questions:

I think after writing that last point, I see where I might want to draw the line: If the question is likely to be harmful to our site/community by occupying extra space in the unanswered queue for long, I'd definitely like it to be migrated away if there's another site that would be welcoming enough to the question (so as to make sure our MMSE user doesn't get a negative experience such as having their question relegated to a site that gives them a bad experience).

I had somewhat the same thoughts as @Anyon when I saw the first of these (I follow the software-recommendations tag). But it seems to me that a community policy of "sometimes it is easier to just answer than to move it to another SE site" seems very reasonable to me. However, it might be worth encouraging a practice of such answers including something along the lines of: "We're happy to give you an answer here, but if you have detailed questions about academic publishing, Academia.SE is a great place, and if you have detailed questions about using TeX/LaTeX, the folks at tex.SE can help you more than we can."

I'd add one advantage to the ones that @NikeDattani lists: Slightly off-topic questions can lead to more on-topic questions. The image format question linked above is what specifically inspired me to ask What LaTeX tools for code snippets are best-supported by matter modeling journals?, (which I think is suitably on-topic, since I'm particularly interested in journals relevant to this community -- CS journals may be a completely different experience.) I've participated here for several months, but only by answering questions from others. This is the first time I thought, "oh, there's a question I would love to ask this community!"

As for Nike's disadvantages -- I think the first should be a non-issue, because I think the ability to follow specific tags allows a contributor to be involved as much or as little as desired. Personally, I'm very interested in a small set of topics discussed here, and I have a workflow that keeps me exactly as involved as I want to be (or really, as I have time for).

The second disadvantage is key, and the reason I recommend a gentle "maybe there are better forums" comment even in quick answers. I think everyone's experience would be better if that user asked their first question here, got a friendly response that helped them ask the other questions in more a appropriately specialized forum, and then (I hope) came back here when they had questions that were more specific to matter modeling!

(I'll slightly disagree with @Anyon that the fact that these are the same user isn't relevant. As @NikeDattani points out, a rapid and friendly response encourages more participation. In this case, it encourages some further off-topic participation -- the SE network as a whole is a great resource for this user, but we aren't the best resource for specific questions about LaTeX or gnuplot.)

Not the answer you're looking for? Browse other questions tagged discussion on-topic .

8
Does this site cover Computational Fluid Dynamics?
6
What topics can I ask about here?
4
Resource Requests: Constructing a Canonical List
5
Making the software tag work for you
4
We've never had such a long string of unanswered questions before, what might be the reason it happened recently?
8
How can data be extracted from the Matter Modeling Beta?
10
Does the Matter Modeling community want to ban unregistered users from asking questions?