Do we want to encourage people to follow this format when giving software (or similar) suggestions?

My favorite thread on this site so far is this one: Is there a free package with robust CASSCF functionality?, because six different people chipped in, and somehow many of us decided to follow the same format, even though there was no written rule. I could easily have listed several programs in my answer, but I decided to focus on one: This meant more effort into quality rather than quantity, but also gave others better opportunity to participate, which I think is good "sportspersonship" (and incidentally raised our average number of answers per question 😊).

When similar questions came up, I encouraged people to follow this type of format, but did not say anything further when they decided to reject the suggestion.

However, after seeing this: 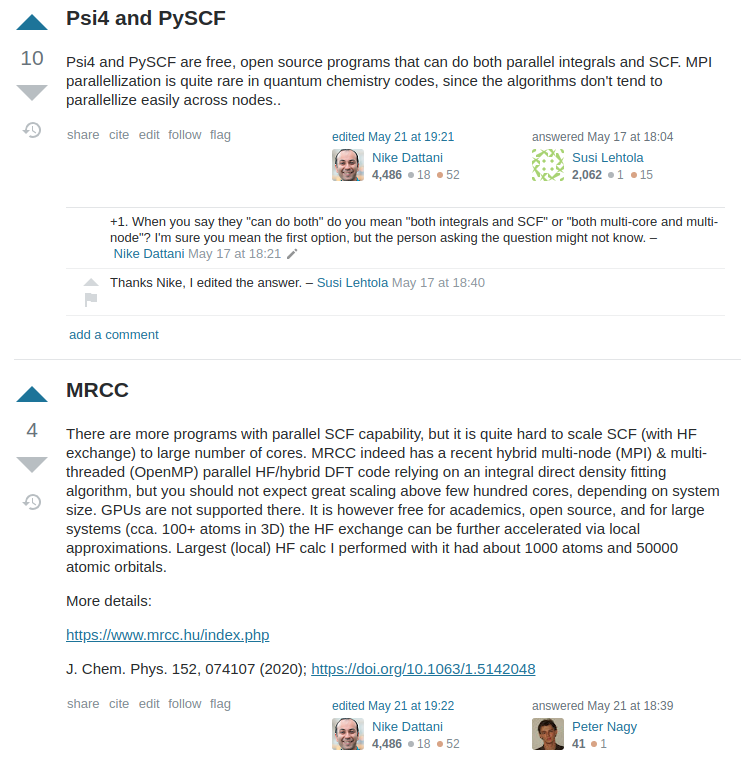 Tyberius wrote in one of these cases: "I would say a question like this will work best if people stick to one framework per answer, so just doing Monte Carlo for now is perfect." which I 100% agree with.

This is a good point, I think we should try to encourage more focused "single-answers" than longer "multiple-answers".

I agree with everything you've said and will only point out a few more reasons answering with one answer is better:

Finally, with regards to sportspersonship. I think people can answer multiple times if they use discretion. I like User Uhoh's answer which basically said it should only be done rarely. The reason is people can somewhat try to game the system that way.

Not the answer you're looking for? Browse other questions tagged discussion participation culture one-topic-per-answer-tag .

5
Software recommendations for X or Y
12
We have let our answer ratio slip, let's do something about it!
2
Why did these questions of mine get a negative score?
5
MMSE Community Promotion Board
5
We hit rock bottom last week, in voting. What can we do now to encourage people to vote more?
11
Does the Matter Modeling community want to ban unregistered users from asking questions?